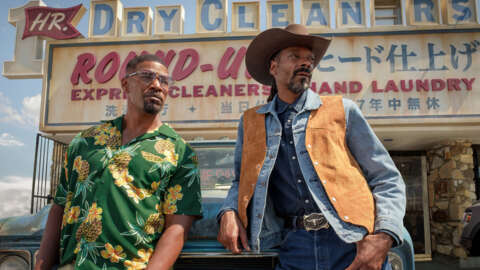 Netflix’s Day Shift is an interesting amalgam of movie genres. It’s a buddy-cop, campy action, dark comedy horror film that probably shouldn’t work. Having multiple competing aspects could lead to wild shifts in tone, tarnishing any chance of presenting a cohesive experience. Thankfully, that’s not the case here as Day Shift not only proves to be a solid horror film, it’s a fun one to boot.

Directed by J.J. Perry, Day Shift follows the story of Bud Jablonski (Jamie Foxx), a down on his luck, blue-collar worker struggling to provide for his daughter Paige (Zion Broadnax). Braces, tuition fees, past due rent–Jablonski’s mounting financial issues has put a strain on his relationships, most notably that of his estranged wife Jocelyn (Meagan Good). When she threatens to move to Florida and live with her mother, in hopes of giving Paige a more stable life, Jablonski’s world is turned upside down. Which in this case is a relative state of affairs, considering that he hunts vampires for a living.

Day Shift’s premise is centered on this familial conflict. There is a looming threat to the general public that manifests over the course of the film. That said, the stakes are intimately tied to those close to Jablonski, a character who constantly gets in his own way. It was his unorthodox methods, for instance, that got him kicked out of the Union (a secret, international vampire hunting organization). A decent paycheck and potential health benefits were just a few of the things he lost along the way. Because of this, Jablonski masquerades as a San Fernando Valley pool cleaner while secretly freelancing for underground contractors. He’s constantly in danger and the pay is horrible. But because Jocelyn only gives him a week to prove that he can contribute to their family financially, there isn’t much time to find a better job.

That’s not to say that Jablonski should change careers. His talent for violently dispatching the undead is not only a boon for potential vampire victims story-wise, it’s also something for the audience to marvel at. The normal tools of the trade like sunlight, garlic, and wooden stakes still apply. They’re just amplified with modern enhancements and a ridiculous amount of physical combat. A well placed silver wire will remove a charging vamp’s head while a shotgun shell full of wooden ball bearings could send one flying through a wall. Bodies contort after colliding into masonry. Large bullet wounds showcase exposed entrails. The film delights in crazy enouncters, each subsequently topped by later happenings.

These kinetic action scenes are imaginative, silly and wildly entertaining. They all feature impressive choreography and solid editing, which one could attribute to J.J. Perry’s history as a stuntman, as well as provide a vehicle for Day Shift’s darker humor. A scene where someone is decapitated by a broken TV is outshined by a vampire being forced to use their feet, held over their shoulders, to defend themselves after being impaled face down on a kitchen counter. It’s all hilariously absurd.

Day Shift’s comedic elements don’t cancel out the horror, but rather complement the carnage happening on screen. The result is an action horror comedy that really leans into its shooting and stabbing. It’s The Lost Boys meets The Expendables, and it works surprisingly well. That said, there are moments that underwhelm thanks to a formulaic buddy cop routine.

In order to secure enough money to help out his family, Jablonski reluctantly makes a plea to be reinstated at the Union. HIs old boss Seeger (Eric Lange) agrees to let him return but only if he’s accompanied into the field with an anal retentive union rep named Seth (Dave Franco). This pairing of a “by the books” accountant of sorts that’s forced to keep tabs on an overzealous field agent is supposed to be funny. Unfortunately, Foxx and Franco don’t have much in the way of chemistry. They are fine enough when they’re apart, but their jokes seldomly land when they are together and the ones that do are carried by Foxx’s comedic timing.

Franco’s Seth seems to be the comic relief–or at least the person that provides a ton of exposition to get the audience up to speed while constantly getting into trouble. The problem is that Franco isn’t funny here. While he does a decent job playing someone who’s in over their head, his portrayal is that of an annoying tag-along as opposed to the self conscious apprentice he’s supposed to be. Bud Jablonski, on the other hand, is a likable character thanks in part to Foxx’s inherent charm. He isn’t necessarily doing a lot of heavy lifting acting wise, but Foxx’s ability to balance both serious and amusing moments is such that his depiction of Jablonski should resonate with most viewers.

The rest of the cast fares well enough. Some, like Meagan Good and Snoop Dogg, entertain even though they aren’t given nearly enough screen time. This is especially true of Steve Howey and Scott Adkins, who both deliver a thrilling display of violence against a slew of vampires as the elite Nazarian brothers. Zion Broadnax delivers a decent performance as Paige and

Karla Souza doesn’t disappoint as the main antagonist/head vampire, Audrey; she isn’t outright menacing but is more or less convincing in her role.

Netflix’s Day Shift as a whole, is better than the sum of its parts. The film is beautifully shot, with strong lighting that complements its black cast members. It also sports a vibrant color palette–the bright blues and oranges adorned by our heroes contrast the dark reds, greens and grays of the villains. The stylishly exaggerated action scenes are always entertaining even on repeat watches. Its premise is decent enough and while the buddy cop aspects fall flat more often than not, the film still manages to be funny. Ultimately, Day Shift is a fun evening waiting to happen for horror and action fans alike.

Image: SonySony just announced that, thanks to “challenging economic conditions”, the price of the PlayStation 5 is about to go...

Collei has just joined Genshin Impact's roster in version 3.0 as one of only two playable Dendro characters, alongside Tighnari....

Just like big shows in the US, cosplay conventions are slowly returning to the calendar in Europe as well, and...

Madden 23 Ultimate Team: How To Build A MUT Team For Free

Madden NFL 23's Ultimate Team is back. The popular online mode is still all about pack pulls and odds that...