How Game Of Thrones: House Of The Dragon Created All New Targaryens 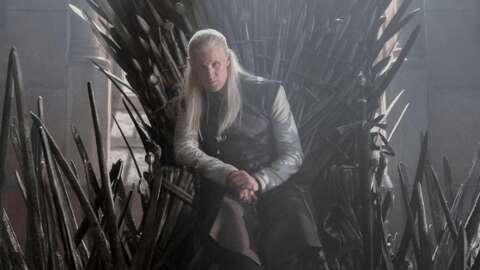 Game of Thrones may have brought all kinds of fictional families and dynasties into the spotlight–the Starks and their giant fur cloaks and winter-based slogans, the Lannisters and their money, the Greyjoys and their ships and squids; but you’d be hard pressed to find a name among them with more impact and immediate recognition than the Targaryens. Despite being represented by exactly one person, Daenerys, for the vast majority of Game of Thrones’ eight-season run, House Targaryen rapidly became one of the most loved (or loathed, depending on who you were talking to) families in the whole of Westeros.

Now, HBO and George R.R. Martin are giving fans a chance to get to know them better through the brand new series, House of the Dragon, set two hundred years before the events of Game of Thrones proper. If the name weren’t enough to give it away, House of the Dragon focuses almost exclusively on the Targaryens at the height of their power–gone are the days of just Dany running around, making questionable decisions on her own. Now, a Targaryen king rules from the Iron Throne with his entire platinum-blonde, dubiously moral family at his side.

Want us to remember this setting for all your devices?

Please use a html5 video capable browser to watch videos.

This video has an invalid file format.

Please enter your date of birth to view this video

By clicking ‘enter’, you agree to GameSpot’s

Now Playing: House Of The Dragon’s Cast Breaks Down How Targaryens Differ From Game Of Thrones

But how do you go about recreating the image of the Targaryens for fans who have already gotten to know them so well the first time around? Sure, Dany may have been solo as Game of Thrones wound down and eventually ended, but she was also one of the most prominent characters in the show and that came with no shortage of lore and information to be shared about her and her history. Even decimated, the shadow of the Targaryen dynasty loomed large over all of Westeros hundreds of years later.

GameSpot sat down with the cast of House of the Dragon to see what, exactly, the new show was planning to do with the Targaryen legacy, and how Westeros’s first family looks different this time around.

Paddy Considine, who plays the current king, Viserys, explained that he’s much different from the Viserys we’ve seen before–you remember Dany’s brother right? He only lasted a few episodes before being murdered by Drogo. He wasn’t a very good guy. Considine said that his Viserys isn’t someone who “isn’t driven by or corrupted by power, he’s a very honorable king. He’s fulfilling a prophecy, but he’s not a typical Targaryen. He’s not quick to draw his sword or anything like that. He’s a peace-time king.”

Meanwhile, Matt Smith who plays the king’s brother, Daemon, explained that he’ll be a bit more familiar. “I think, weirdly, chaos brings [Daemon] peace,” he said. “He’s after something ‘other,’ I don’t think he knows what it is yet.”

Olivia Cooke, who plays the older Alicent Hightower, daughter of a Targaryen-aligned house, explained the family more in the context of the wider world. “They’re at the pinnacle of their power.” She continued, “they’re vulnerable as well as at their most powerful. This season, you’re aware of the intricacies between their familial bonds and also how they’re perceived in the world.”

That perception is at the core of House of the Dragon’s drama. While it may be a family story at its heart–Succession with dragons, essentially–it’s also a Game of Thrones-flavored political drama full of backstabbing and maneuvering for power and control. The Iron Throne may look a bit different this time around but its still got the same deadly allure.

House of the Dragon’s new episodes drop on HBO and HBO Max every Sunday.

The products discussed here were independently chosen by our editors.
GameSpot may get a share of the revenue if you buy anything featured on our site.

Image: Insomniac | KotakuFor the past week or so, some folks playing Spider-Man: Miles Morales on the PC have been...

Fortnite Exotics And Mythics In Chapter 4 Season 1: All Special Weapons And Items

Fortnite Chapter 4 Season 1 is packing quite a lot of new stuff to check out, so you'll have no...

Image: NetherRealm Studios / WB GamesThe Winter E3, aka The Game Awards, is airing next week and people are getting...